The Gonzo vs. The Weird

(note: I originally wrote this as a comment on g+ about the differences between DCC and LOTFP. After thinking upon it more I’ve decided to expand it into a more general blog post)

In RPG gaming I find there are two conflicting ideas that have started to bother me in how they seem to be used interchangeably. Usually they are referenced directly by what I believe is their most common labels: Gonzo and The weird, which I will refer to them in this article.

They aren’t always referenced directly but more often referenced in terms of what would make good material for a particular game like Lamentations of the Flame Princess game or Dungeon Crawl Classics. Like that’s so Lamentations, or that’s so DCC!

This bothers me somewhat as I think The Gonzo and the Weird come from two very different styles of literary sources and each will evoke a very different role-playing game. I really don’t have a preference for one over the other, I've played both styles and love both. But I do think that it’s better to try to evoke one over the other as trying to evoke both tends to fail and I do think they are incompatible in some sense.

I will begin by trying to define both, hopefully without getting to literary or boring. 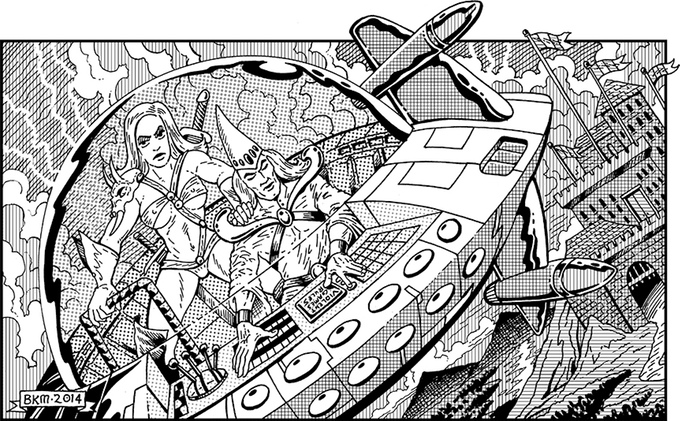 The term ‘gonzo’ was first popularized by ‘gonzo journalism’ a style of writing mosty notably seen in the writings of Hunter S. Thompson. It tends to involve journalsim told from a subjective point of view that often emphasis things to a exaggerated intensity or bizzarre surrealism. I’m not going to go into depth about this, but am just going to say that over time the definition of Gonzo became a bit wider to include often bizarre and 'energetically' written works of various kinds.

I find this is how the word is used today in the rpg community. Most, I find, tend to use it to refer to a style of game that involves two key things in a game:

I would say Gonzo games are most closely related to Swords and Sorcery type stories. Those stories tend to be pulpy and focus on character action and advancement in the world. Very often the characters start off as destitute nobodies.

I would even categorize some genres of swords and sorcery fiction, like the John Carter of Mars series, to be more Gonzo then swords and sorcery. I think that for a sub-genre like Swords and Planets, where the sub-genre is defined primarily because the works use a blend of genre tropes or cliches, could be better categorized as Gonzo (as I have defined it) rather than having endless sub-genres.


Regardless, I find Gonzo games tend to be popular because they are both unpredictable and unlikely to get stale, and tend to greatly empower the players where the focus is on their characters and how they change the world through their actions.

At it’s extreme Gonzo games tend to involve the players end up traveling to new places that are so different that the world becomes a bit of a patchwork of exotic locations more than anything else. This is assuming that it all takes place all in the same world where inter-dimensional travel might be a thing.

This said, I think Gonzo games are very much different from other high-powered dimensional hopping type games or stories as due to it’s Swords and Sorcery roots; the players are very often not that powerful, and very much at the mercy of whatever new environment they have found themselves in. 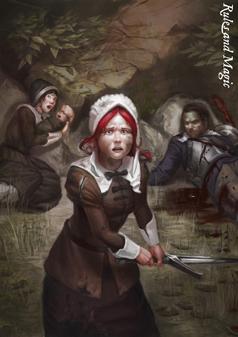 The Weird tale and weird literature has become popularized the most by the writings of H.P Lovecraft who is seen as the fundamental cornerstone of it. I’m not going to delve into this too much either, as entire books have been written trying to define exactly what The Weird is. But instead I’ll use the following general definition:

Weird tales are often most closely related to horror. Both tend to have build atmospheres of dread, both tend to involve bad stuff happening to people, and both tend to be set in the real world and involve normal people as their main characters.

In some ways Weird Tales can be defined as a subset of horror. Mainly as horror stories that don't involve any Christian theology (as Gothic horror tends to) or elements of folklore like vampires or werewolves. Instead Weird Tales tend to rely on sci-fi or fantastical elements instead as the manifestation of the unknown and take an ambiguous towards what exactly it is or happened.

Weird rpg games tend to be popular because they often have a sense of dread atmosphere and mystery about them. You play to see what happens in all RPGs but with there being a bit of an actual mystery to explore, things become more so engaging. There tends to be less of an emphasis on pulpy action as in Swords and Sorcery. Players and characters are very often less concerned with what happens to their players, whether or not they live or die horribly from touching the accursed idol. Death is entertaining if it's comical.

Instead I find players are more interested in discovering the truth of the mystery, in 'beating' the game not through having their character advance personally in the world, but in seeing if their thoughts and ideas about the mystery, say, what exactly is going on regarding the weird cult that worships the weird idol, are accurate or not.

Why the two are incompatible

However, these differences aside, I think the biggest difference between the two is simply how each handles the sense of the normal, or normality.

I say 'extreme' and not 'weird' as in my opinion very often even though such things seem outlandish, grotesque, fantastic, or abnormal, very often they are much, much less weird then the things in weird tales. This is because, to me, the abnormalities in weird tales are inherently incomprehensible.

In contrast, the strange or extreme things about a Gonzo setting tend to be very comprehensible. If they weren't the game wouldn't really work as most of the challenge that comes from a Gonzo game and setting, is ‘figuring out’ the setting and gaining power in it. For example, if takes place on an alien planet ruled over by purple aliens, figuring out who their ruler is, how to curry favour and power, what the aliens fear, tend to be very valid goals and the inherent objectives of a Gonzo campaign. Very often that once this is accomplished, in true gonzo fashion, the characters find themselves whisked away or forced to flee to a new exotic location to begin the process again.

Thus, in this manner in a Gonzo type game the PC characters tend to be ‘agents of normality’ who are intruding upon an abnormal world and slowly, through learning about it and gathering power in it, making what was considered abnormal to them, normal. Once they do, very often they are whisked away to a new location.

In contrast, Weird tales or games tend to follow the almost opposite arc. The characters tend to begin in a normal world. It may take place in the past, may have a few things about it like demihumans, that our normal world doesn’t. But by on large the world tends to follow a Gygaxian Naturalism scheme where it’s mostly full of non-adventuring people just trying to make their way in life as they would in our world.

Normality is everywhere, it surrounds the players. What separates them as adventures from other peoples in the world is simply that in some way the abnormal has intruded into their lives. Where for some reason or another they have gotten wrapped up in something that they have decided to investigate. The more the approach the abnormal singularity, the stranger things become, until they are generally forced to withdraw, regardless of whether or not they have actually figured out the abnormal singularity; as often times there really is nothing to figure out. The abnormality simply is.

You can't conquer the Weird setting in the same way you can in a Gonzo setting. Both do explore the setting, finding out more about it, but whereas the Gonzo player does more to advance their character personally, in my experience, the Weird player does more for the sense of discovery itself; the abnormality is fantastically weird enough that merely getting a glimpse behind the curtain is satisfaction enough.

This is partially why I think some people really don't like negadungeons such as Death Frost Doom. Where their characters don't fiddle with anything and the entire dungeon grinds to a halt or seems unfair. With Weird games there is an inherent understanding that it's not the personal advancement of your character that is the goal, as seen in swords and sorcery and other OSR games. It's the thrill of discovery and the atmosphere of the fantastic and weird that is the goal.

In this manner, the goals of a Weird campaign are fundamentally different from a Gonzo one. In a true Weird campaign, you would never be able to ‘normalize’ the abnormality in the same way you could in the Gonzo one.

In a true Weird Game you can’t gain knowledge of the abnormality and power over it in the same way you could a very strange alien kingdom in a Gonzo campaign. You can gain power and knowledge from the normal aspects of a Weird campaign. Like the kingdom the intruding weird thing is found. And such power is generally used to try and destroy or reject the intrusion of the abnormal. This rejection of the intrusion tends to form the underlying goal of the campaign.

In conclusion, I find the biggest difference between the two is that:

The Gonzo: the characters are the objects of normality and it is the characters that are intruding upon the abnormal setting. Their goals tend to inherently to normalize the setting through gathering knowledge and power over it and conquering it.

The Weird: the characters and the setting are the objects of normality and it is the abnormality which is intruding upon them and the normal setting. Where if there was no intrusion by the abnormality, there would be no game in a way. Furthermore, the players ability to conquer and ‘normalize’ the abnormality is generally very limited. Very often they won’t be able to gain much knowledge or control over it. Instead they tend to seek to try and block, defeat, or reject the intrusion of the abnormality through their personal actions or at times with the aid of the normal forces of the world.