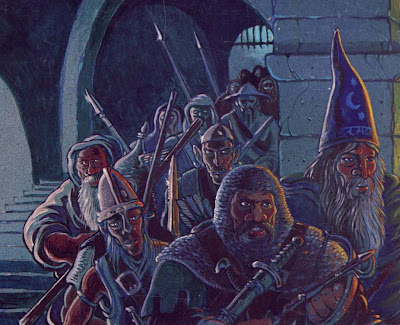 I find classes to be the bedrock of D&D inspired RPGs. Picking a class is the choice that will have the most consequences for a player during character creation and often defines the very role they will play in game both mechanically and narratively.

One of the first things to bloat out of control in supplementary material, or later editions of an RPG, I find is the amount of classes available to the player. I find this a bit ironic where there seems to be precious little that attempts to examine how a well designed class comes together. This article series is an attempt to do so in examining and designing some new classes for Lamentations of the Flame Princess (LOTFP).

The main reason I find most classes are poorly designed is because they are designed from the top down. Classes tend to be the thing that game designers turn to first to inject a sense of narrative in the game. Game set in a world with vampires and werewolves? Include a Witch Hunter class. Game set in a high magic world? Include a living elemental class. Different abilities and mechanics are thought up to allow the player to roleplay a certain character from the style of narrative the game embodies. Like getting an attack bonus against creatures of the night for the Witch Hunter.

While on the surface there is nothing wrong with this I think it has lead to overlapping classes. I find 5th edition is especially bad for this where I think 5th edition has lost all sense on what exactly a class is and is all over the map. I think overlapping classes are something that should be avoided as whenever there is overlap, you tend to have bored players at the table. A lot of times overlapping classes happen because people feel more safe just combining various elements of different classes in order to create a new class; they are worried about balance issues or the game coming apart. Very often classes tend to be literal linchpins where various subsystems of the game, combat, magic, skills, etc. are bundled together, and so are hard to alter. If you start really ripping them apart it can have wide ranging consequences.

I think a lot of OSR games realize that overlapping classes and class bloat is bad and try to cut down on it by having only four classes. They are often seen as the ‘meta’ classes from which most other classes are derived from (2nd Edition even used this nomenclature). The four classes are:


Of these four I think only really three continue to be distinct in most OSR games:


I don’t include the cleric as in most OSR games has become basically just another flavour of magic user. Some games like Dungeon Crawl Classics make the cleric a little more distinct by having greater consequences from the God the cleric worships and subsystems in the game for this. This does help to make the cleric something more than just a blend between a fighter and support type magic-user.

However, what I find that is most interesting and often overlooked about the design of the cleric is that it was originally added to counter undead. Where it had it's turn undead ability and and was basically it's niche. This often goes for other classes as well. The Ranger was originally added to deal with wilderness encounters as the game began to move away from being a purely a dungeon crawling game to involving the wilderness outside the dungeon and nearby town. In this manner I think that while these two classes may have been inspired by and added because of different narrative archetypes (the Ranger was thought up as some guy wanted to play Strider from Lord of the Rings) I feel like they were only really realized when a specific type of encounter arose in the game in which they would make sense.

For example, at the time of its creation, if you weren't fighting much undead, then a cleric wouldn't be very useful. Same with the ranger. Even though most OSR RPGs don’t include a ranger, I think it is still very unique and a well designed class due to its focus on outdoor stuff, but is often underutilized due to lack of wilderness encounters in modules or adventures. There has often been an attempt at a social class, ie. bard, but often not designed well, partially because there is a total lack of socializing rules in most OSR games and an under emphasizing of social encounters in modules or adventures.

This is something that I think can be fundamentally realized for all classes. If they don’t address a specific encounter type in the game, then they tend to simply be the blend of two other classes, regardless of how strong their narrative concept is. An example of this is the barbarian. It’s an interesting narrative concept and has some interesting mechanical abilities, it’s rage, but it basically uses the same gameplay subsystems the fighter does and excels at the same encounters the fighter does. If you have a fighter and a barbarian in a party, it can get a bit boring, or combat can lack tension, as you have two people who are both good at the same thing.

Or worse yet, if a class is not a blend, and doesn't address a specific encounter type, it tends to not be that useful. Like having an awesome ‘Accountant’ class but no ‘taxation’ encounters. It may not be a blend of other classes, like the barbarian, but it’s kind of a useless class in traditional D&D. I think if you really examine what a class is, the design of most classes can be broken down into the following elements:


If a class has a weak narrative concept...then the player won’t be interested in them or if the concept is too strange, won’t know what to do with them or how to roleplay them.

If a class has no mechanical bonuses...then class will likely be too niche. It doesn't have something that everyone can do that it’s better at. It will likely be tailored too much to a specific situation and perform averagely outside of it making play boring most of time. Where the class is a bit of a one hit wonder.

If a class has no unique subsystem related to it...then class will likely be too indistinct or bland. It will be good at something that everyone else can do and perform well but have no moment to really shine. It will probably seem too much like a combination of other classes. Like a barbarian without it’s rage mechanics or really basic rage mechanics. Sure, it’s an interesting archetype, and is good at fighting, but likely seems a bit bland compared to the fighter, especially if the fighter has some unique abilities and moments to shine.

If a class has no challenging encounters geared related to it at all...then the class will have nothing to do.