So, it’s been several months since I last posted about my Veins of the Earth campaign. I meant to blog about each session but life got in the way with preparing to move across the country. Anyways, I’m going to give a condensed version of the campaign. 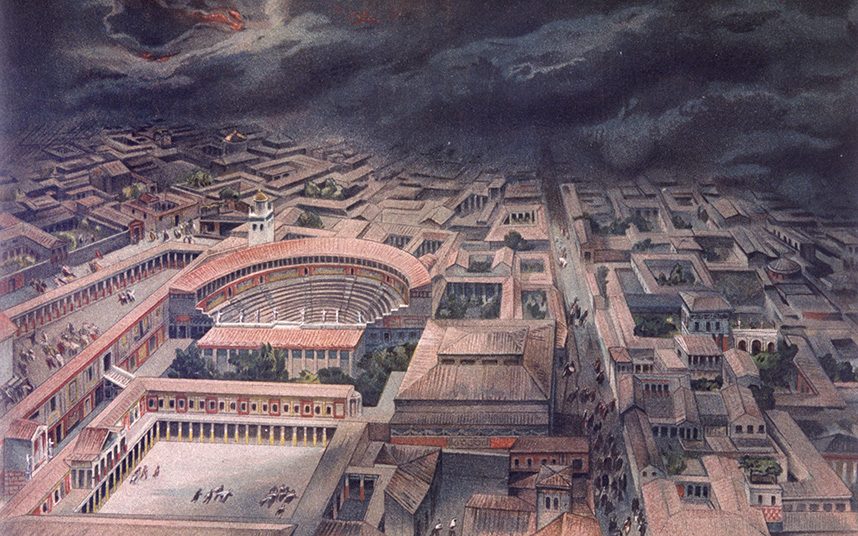 The Gang further explored the Salt Mine that they found themselves in in the first session. They soon came across a partially destroyed Roman temple that had somehow fallen deep into the earth. Inside they found a statue to Athena and one of the Gang claimed a magical spear. Afterwards they came across more Roman ruins, the remains of an entire city block in fact, all flooded with lava. Hoping across the roofs they made it to the far side where they entered into the Forum. Inside they met a bunch of Pyroclastic Ghouls. While they were only about 30 in number they were convinced that they were the inheritors of Rome and that their leader, Augustus Coriolanus was Emperor.

The Gang soon referred to the ghouls and the sunken ruins in which they resided as Ash Rome. It proved to be a bit of a base for them during further explorations of the Veins. The Ghouls told them that the lands to the east were submerged in water and there lived a terrible aquatic monster there and that in the lands to the west lived the strange enemies of Ash Rome.

The Gang decided to head to the west, partially because of the sizable bounty placed upon the head of the terrible aquatic monster. They soon came to a series of caverns half filled with water. After being attacked by some scissor fish, they decided to fashion a boat from the remains of a dead giant beetle. They then begun to sail the under ocean. They came across the Knotsmen who were willing to trade information for children. After some careful questioning and insight into the history of the Knotsmen the Gang learned that the Knotsmen run an orphanage in the Veins. They take children and take care of them, giving them probably the safest and best environment to grow up in the Veins, but however upon natural death the child’s soul goes towards paying off the Knotsmen unending twisted debt where they bargained away the future of their very race. The Gang was a bit conflicted about this.

Regardless the Gang continued on and soon the terrible aquatic monster came upon them. It proved to be a Castillian Caddis Larvae. They decided to retreat a bit to fight it on the shore. A decision which proved prescient as it killed all their hirelings and almost killed the entire Gang but they were saved by a bunch of lucky saving throws and the help of the holy spear gained from the temple to Athena.

After slaying the Castillian Caddis Larvae the Gang returned to Ash Rome. Word had spread about their deed, and the sizable stash of weapons which was now up for the taking and a coup had begun in Ash Rome. The Gang largely did not get involved but decided it was probably best to get out of town anyways.

They headed to the east where they came across a labyrinth of living statues of which the Gilgamesh was their leader. They killed the Gilgamesh and managed to narrowly escape with their lives but were a bit undecided about what to do next. They wanted to get out of the Veins but did not know what the best course of action would be.

However soon two things became apparent: the first was that they were being helped by some strange unknown beings. The Gang would awake from their slumber to break camp and find that items they owned that were wearing down would be repaired and that several times they would come across useful items such as rope, like someone had left it where they would find it when most needed.

The second thing that became apparent was that they were being watched or followed by another more malign and sinister force. They would sense it watching them by feeling an immense hatred. It would appear but only in purest darkness when the Gang had extinguished all their light sources. In the darkness it would appear as a silhouette of a tall lithe figure in the darkness, a silhouette of pure negative space blacker than black. Sometimes the figures would do things, like they’d see a flash of black and whatever enemy they were fighting would be dead. Sometimes it would attack one of the party members laugh, and then disappear. The figures did not respond to questioning and seemed capricious, most often vanishing soon after the Gang became aware of their presence.

After traveling on through the Veins the Gang made their way through spiderweb filled caverns in which the Arachnopolis Rex ruled. After rescuing some children the Gang reluctantly traded some of them to some Knotsmen for information about the two forces which seemed to be trailing them. The Knotsmen explained that they were the Aelf-Adal and the Gnonmen, and that either would probably be able to tell them how to get to the surface. The Aelf-Adal realm was ruled over by a capricious sexless Queen, a kind of dark underworld fairy realm. She could be bargained with albeit at great risk while the Gnonmen were prisoners and would need to be freed.

The Gang decided that the Gnonmen sounded like the better bet and so set off. After navigating their way through the sticky lairs of the Arachnopolis Rex, they soon left that cavern system behind and made their way to the Gnonmen. When they finally found the location where the Gnonmen were said to be held prisoner they found a strange sight: an iron door in the middle of a cave.

After knocking on it a slot in the door opened up and a gruff voice asked for a password. After several attempts it told them that they were expecting anybody to pick up the shipment anytime soon and to go away. After bursting in and exploring the cave system beyond the door the Gang found they had stumbled upon an illicit drug production operation run by several strange gray dwarves. They were using enslaved Gnonmen in order to manufacture their powdered drugs Willy Wonka style. The ingredients for the powder came from several encaged monsters from the Veins including a Fossil Vampire and Tachyon Troll  that the Gang freed and teamed up with. The Tachyon Troll ended up betraying them and the Gang killed it with some help from the Fossil Vampire which they swiftly got out of the way of after as it seemed to be very, very powerful. After exploring the caverns further the Gang discovered that the key to the Gnomens enslavement was a magical bell made out of star metal. The Gray Dwarves would ring it to hypnotize and control the Gnonmen who couldn’t stand it’s sound. In a battle on thin iron walkways over a dozen boiling cauldrons (full of mould being magically grown to turn into the drug powder), the Gang killed the leader of the operation, freeing the Gnonmen and earning their gratitude.

The Gnonmen helped the party ascend to the surface and Gang headed off to other adventures.