In my previous post I talked about how making players outsiders, strangers in a strange land, can do much for evoking a sense of the weird. Having the player character not be local to the region servers as a strong logical reason why they find it so weird.

In this post I would like to examine the geography of the region they find themselves in to see how it can be convey a sense of the Weird. The two main guidelines from my introductory post that I will keep in mind are: The Players should venture from the normal into the weird and The Weird should evoke a sense of awe

The first I think is easy to convey. The players should have to go from more civilized area's full of 'normality' to area's that are are full of wilderness where they encounter weird things.

The second is a bit more complicated. If the Weird elements exist in a civilized area, or an area that was easy to settle, then they would probably have been investigated, experimented upon, commercialized, exploited, and in general not evoke much of a sense of awe. For example, if there existed a weird place where gravity was reversed and water flowed up a cliff in a reverse waterfall, even if it couldn't somehow be commercialized directly, such as by putting a watermill there and trying to create some kind of perpetual motion water mill loop, the tourist industry that would invariably spring into being would probably greatly reduce all sense of awe. To this end one for the Weird elements to remain awe evoking they needs to be isolated. Otherwise they become normalized or 'civilized'.

Isolating The Weird is a tricky thing. Having the players randomly explore a remote wilderness map and randomly stumble across weird things is generally not the best way to run a table top RPG. Things tend to work a bit better when the players have various leads (rumours, clue's, suggestions) to follow up on. It helps them decide what is relevant to their character and keeps the game interesting as the players can pursue what seems most interesting to them.

While having undiscovered, unexplored wilderness, like remote Siberia, may work well for explaining why the weird elements are isolated  I don't think it creates the most enjoyable hexcrawl. Additionally if the land were truly unexplored and undeveloped it really limits the weird stuff to more natural things.

So in order for the players to receive leads about the Weird things isolated in the wilderness, there needs to have been someone who experienced them and came back to tell the tale. The easiest way to do this is to have knowledge about the Weird encountered as general myth and rumour. Someone, probably not recently, encountered something weird and brought back a strange, probably not wholly accurate story of it that has become embellished over time or they are of questionable bias.

In this manner the Weird element is isolated not purely in a geographical sense (although that helps), but is isolated because it is really dangerous to travel too. Despite its distance to civilization, few manage to reach it without dying and it hasn't been exploited by humankind.

Journey to the Weird!

Getting to the Weird shouldn't just be a matter of travel, like spending four weeks or four months in the wilderness bushwhacking your way to where it is. It should be a journey! A physically dangerous, psychological testing journey! One that breaks the spirit of lesser men! Getting to it should be a quest in a classic sense.

Where the bulk of the adventure is what happens on the way and there is no guarantee it will be reached or when reached, will be what the party thinks it is, and getting there requires an almost obsessional desire to see things through no matter the cost.

So far we have determined that the geography of the region, or some part of it, needs to be civilized in order for people to find out about the existence of the Weird elements. This place is also logically a good place to start off our adventuring party in. Where they are strangers to the area and have come to this bastion of civilization in order to venture out into the wilderness to seek out and explore something Weird they heard a rumour or tale about.  It should also be somewhat pedestrian in nature so that the emphasis is not on exploring it but seeking to explore the wilderness.

While a good idea for this type of locale may be a frontier town, and it is a common trope in RPGs. I think it doesn't work well in creating a Weirdcrawl. If it's a frontier city, it means there's a frontier that's slowly being expanded into by the civilization and settled. This tends to create a sense that the land beyond can be 'normalized' and isn't inherently inhospitable and isolating. This runs counter to needing the geography to provide logical reasons why the Weird elements haven't been explored or exploited.

To this end I think the city should be more of a 'port' city or gateway city. Kind of like the last city of the civilization or empire before some form of inhospitable terrain where the geography changes.

If you examine the geography of earth and its history one interesting thing that arises with landscapes with natural barriers and inhospitable terrain is the emergence of trading cultures and great trade routes. This is more fully detailed in A Magical Society: Silk Road but which I will summarize.

You begin with a geographical barrier like a mountain range. However, instead of simply having the terrain on either side of the geographic barrier be good or passable terrain you make it inhospitable. Like a desert or steppe or swamp or thick jungle or tundra etc. Whatever it is, the inhospitable terrain makes it so geographic barrier won't simply serve as a natural border between two agrarian civilizations but will create a large buffer zone. This buffer zone may have nothing on the other side, but more interestingly, could have another such civilization on the other side. Because the civilization on the one side likely wants trade goods they don't have from the other and vice versa, naturally you get trade routes forming through the inhospitable terrain.

This creates an interesting situation where you have people traveling from a civilized place through an inhospitable and somewhat hostile area, probably not staying to long or exploring to much, but perhaps encountering something weird and bringing stories of it back to civilization. Furthermore, because the two civilized area's on either side of the barrier may have expanded outward into the inhospitable terrain beyond trying to claim and control it as their own (as Empires are won't to do) before retreating or collapsing back, the inhospitable zone may be littered with the remnants and ruins of these previous attempts or even previous empires or civilizations.

Common natural barriers and inhospitable zones can be summarized in a random chart:

The Cultures of Inhospitable Zones

While the name 'inhospitable' may seem to suggest that no groups of people can survive in an inhospitable zone, there are very, very few places on earth that are truly inhospitable for human life or habitation. However, the cultures of the people that tend to live in these zones which are inhospitable to an agrarian civilization tend to share some common traits. These are detailed more in A Magical Society: Silk Road and once again I will summarize here:

Using the above I've created the following regional map. It's not complete enough yet to be a hexcrawl but gives a good idea of the region. I rolled a 3 and got River/Swamp. I've decided to base it off of Vasyugan Swamp in Russia as I like the idea of a Slavic themed cold climate swampland in the middle of the continent rather than near a coast. 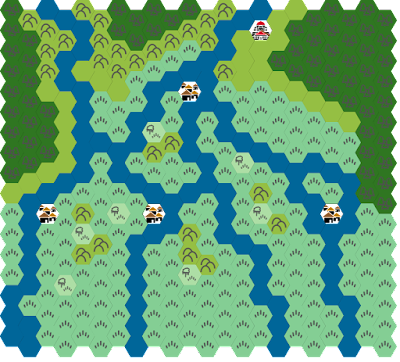 In my previous post about making a Weirdcrawl I posted guidelines I had derived from H.P Lovecrafts notes on writing weird fiction about creating or evoking a sense of the weird. One of them was The players should venture from the weird into the normal.

One such way I think this could manifest, and help convey the tone of a setting, is through having the Player Characters be outsiders to the societies they find themselves in. Partially because if they weren't outsiders, they'd probably be content just remaining in normal society and never venturing into the weird. Their outsider status serves as motivation for them to adventure and adventuring marks them as an outsider as they have less and less to relate to in normal society. While they are not exceptional ability compared to your average person, they are a bit exceptional in motivation being Outsiders.

I think there are two ways they can be Outsiders.


The first is in an external manner such as being from a foreign place where through their appearance, customs, and lack of social connections, they don't belong to the society they find themselves in. This is a fairly common trope in a lot of TTRPGs, especially those that focus on exploration. By having the players come from a far away, generally more civilized place, it makes it easier to explain why they know so little of the new lands around them and why everything is strange and full of wilderness when they explore.

The second way I think player characters can be Outsiders is internally. This is something that is seen in fiction a lot where the character feels alienated to their own nature and feels driven by some part of themselves that they don't completely understand. Internal motivation is typically represented in TTRPGs as some kind of drive.

Furthermore, these two things, external and internal alienation could feed into each other. Where the characters could come from societies that tend to engender people who feel alienated from the time/place they are living in or societies that are undergoing massive change and some form of collapse where everything feels like it's falling apart socially and spiritually.

At first I was thinking of making the setting a bit more generic fantasy but then thought that the whole idea of a campaign centered around exploring the weird, combined with the PCs as outsiders got me thinking of H.P Lovecrafts Dreamland stories where people come from the real world. But instead of coming from 1920's America, come from different historical times, from socities as described above. Where the characters feel trapped, where the external and internal alienation feed into each other and the person seeks to escape, and so does into a Dreamlands like setting that is full of exploration and weird things.

In any case, in accordance with general OSR philosophy I believe that the simpler these two things, internal and external alienation, can determined the better and that a random generation chart can be used for each during character creation.

What society are you from?

What is your drive?