In my last post I talked a bit about in the past I've often tried to include more complex combat rules to make OSR combat more interesting, but players rarely engage with them.

One of the biggest reasons for this I felt was because combat in OSR is inherently reactionary. Players don't really plan to get into combat and I find don't plan extensively for it. Most times monsters are obstacles and you never know what you're going to run across. Getting into direct combat with them tends to be the worst solution to getting around the obstacle they represent because combat uses up a lot of resources and is often high risk.

As a result, if they do get into direct combat, I find most players are just content to spend a few turns slogging away at the monster, preforming attack rolls back and forth, trying to do as much damage and kill it as quickly as possible in hope they can get lucky with the dice rolls. Either defeating it, or deciding after a few turns to cut their losses and run away to come up with a better plan. Or well, this is often how combat goes if what they are presented with is kind of your average combat encounter. Fighting some bandits or a troll or something.

There is nothing wrong with this at heart, but I do think it is good, every once and a while, to try and do more to make combat interactions interesting. Previous editions of D&D have sought to make combat more interesting primarily by giving monsters more unique and interesting abilities. This tended to end up with bigger and bigger stat blocks with 4th edition being the worst: 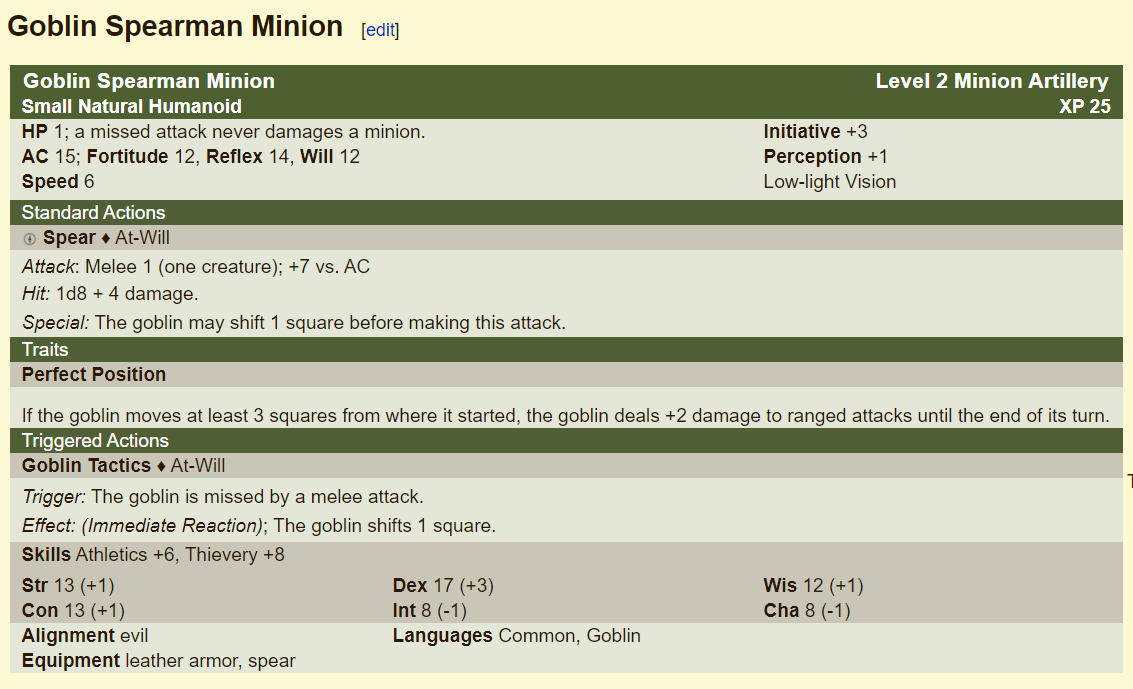 Where it basically turned D&D into a miniature game (and a pretty decent one if that's what you're into but I am not).

5th edition has toned it down somewhat: 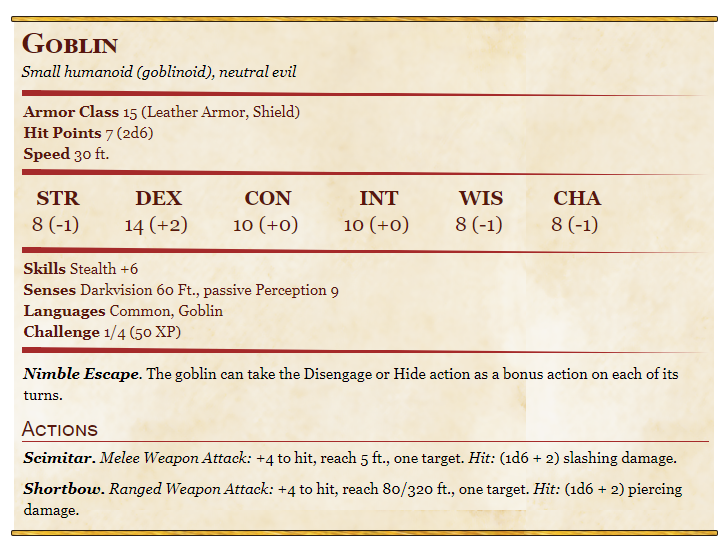 But it still kind of remains that in both cases the are both describing monster abilities. Little special attacks and actions the monster can do.
While I do think this adds some variety to combat, I find it also tends to lead to strategic bloat. Where combat is thought about in a purely strategic abstracted terms. Like, if monster does X, then I need to do Y. If I'm at position in Z in the imagined space and want to react in Y manner I need to do B. You begin to move further away from imagined narrative elements to miniature or board game like elements.
The best way I think to counter this is to not think about monster abilities but think about monster behaviour. Abilities are things they can do. Behaviour is more holistic, concerned with why they are doing the things they do, their motivation. This may seem like I'm making monster design into a amateur theater class but I find the following method works very well.

First we start off with a basic monster name, description and stat block. I'll use a goblin from OSE for illustrative purposes: 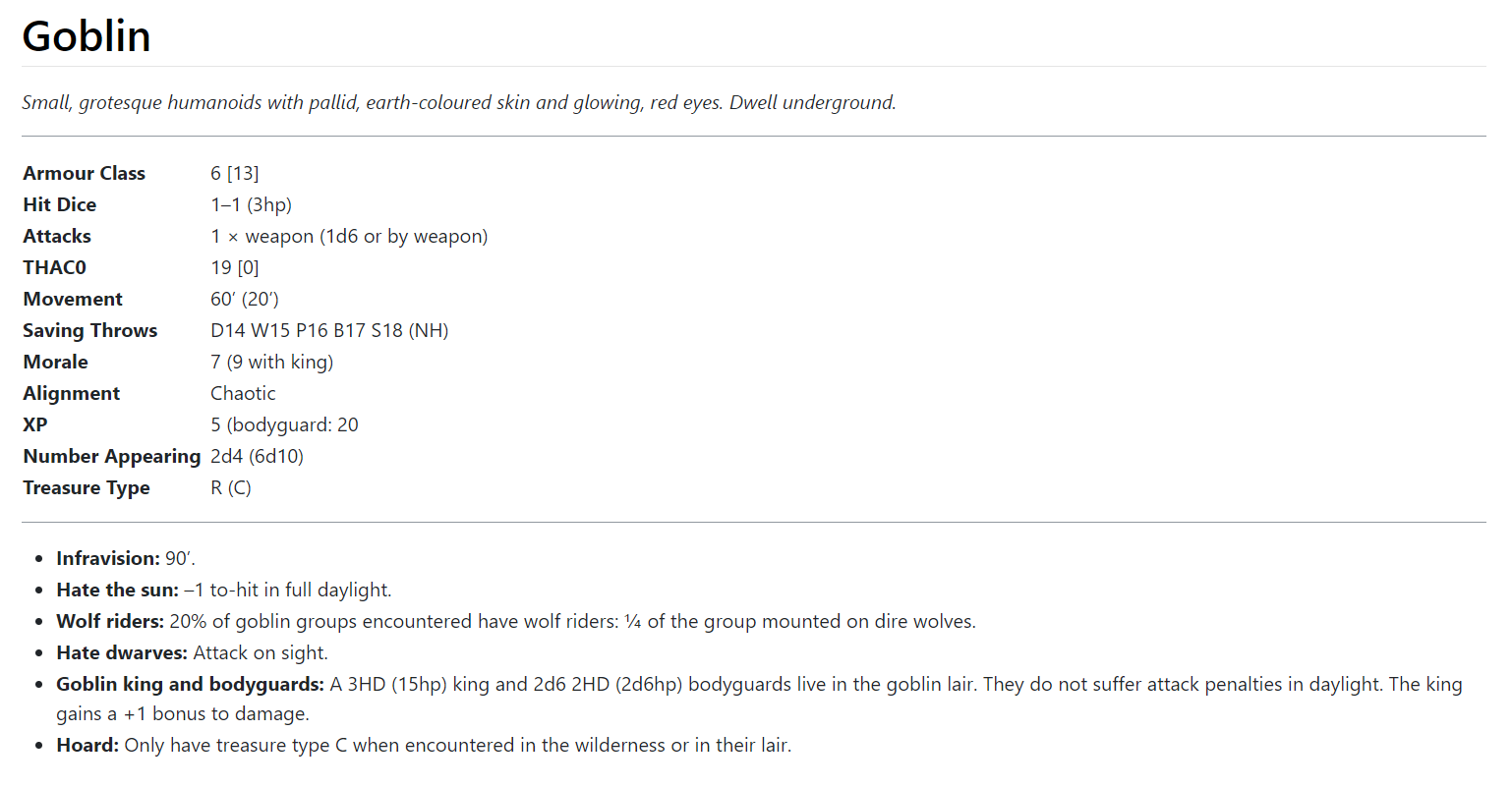 Now, to begin, it's not too bad. It's kind of got some behaviour encoded into it through having them attack dwarves on sight and hating the sun. However, it's kind of all mixed up in other information about it including abilities, the composition of the encounters you'll have with them, and how they can differ from combat encounter to combat encounter . What I try to do to really define a monsters behaviour is pull from a list of different key words.
I try to make these keywords very action orientated, where they describe behaviour. I try to use more verbs, adverbs, than adjectives. I'll then use these keywords to describe monster behaviour in a short sentence. So:
Goblin
Small grotesque humanoid with pallid earth coloured skin and glowing eyes.
AC 13
3 HP
1 attack 1d6
SV 14
ALWAYS attacks dwarves.
AVOIDS the sun at all costs.
COMPASSIONATE towards creatures smaller than it.
NEVER attacks alone, even if you can't see the other goblins.
Right away I find this presents a much stronger sense of how the monster actually behaves and gets the GM thinking about how it would strategize and attack in battle.
Like maybe it has the bravest among it attack first halfheartedly, and when everyone is focused on it, the others attack from behind or slink out of hidden holes.
Or maybe it attacks with it's pet rats scampering all over, nipping at the characters toes. Or they simply throw spiders they breed at the players.
Maybe they attack the players at twilight outside in overwhelming numbers and if the players can figure out they avoid the rays of the sun they can learn to escape them.
It also tends to create a variety of monster abilities so the players don't just see goblins and automatically assume they're going to have daggers and attack in a group or something, maybe one has a poisoned dagger. There are many ways a goblin might fulfill it's behaviour of always wanting to attack a dwarf.  Maybe it hates dwarves so much it runs at the nearest one and jumps on him trying to bite him (bites which carry infection) in a suicide charge. Maybe it waits until the party is sleeping before trying to stab the dwarf to death in his bed. Maybe it hides in the shadows and tries to drive the dwarf to fury by mocking them continually.
In all these cases I find it pretty easy to riff off of the monsters behaviour when described this way. I think this is because when you understand how a monster relates to the things in the world around it, you understand what it's likely to leverage in combat. Just like you kind of know if the players discover they have a cheap supplier of vials of oil they're ALWAYS going to carry them and leverage them in combat via oily moltov cocktails, creating a slippery floor, creating fire arrows, etc.