In my previous post I talked a bit about what I thought were some baseline qualities for a weird wonder. These weird wonders would serve as the object of quests in a campaign based around venturing into the wilderness to seek out and explore places of weird wonder. Kind of like Indiana Jones combined with the Dreamlands of H. P. Lovecraft.


The Paradoxical Duality of the Weird

There are many ways to think about 'weird' things, what they are, and how to define them. I have done so already in my blog, mostly in service of how to create a creeping or gradual sense of the weird where if you have some weird wonder as the object of a quest, the focus of the campaign and play should not just be the final encounter with the weird thing but the journey itself. A journey that has a sense of rising weirdness and tension as the players venture deeper and deeper into the unknown wilderness and away from normalized civilization. So far I have yet to attempt to really define what makes a weird wonder weird and how to go about creating or generating that. I will attempt to do so now.

At heart, I think weird or unsettling things are paradoxical in nature. They exist and yet everything we know about the world, our knowledge, our past experiences, our primordial instincts, tell us they should not exist. This creates a cognitive confusion, a cognitive dissonance that causes emotional reactions that tend to range from awe, to fear, to anger. (I don't have a background in psychology so am probably lacking in the correct terminology but if anyone has any ideas please leave a comment! It's something I'd love to read up on more but have a hard time finding good sources.)

To this end I think the best way to achieve a sense of the weird is to have some object straddle two different containers in our mind about what is known or real.

For example, ghosts. We know that people live and what living people are like. We know what dead people are like also. In our brain we have formed two containers for these two concepts. A ghost straddles these two containers because it is a person who appears both dead and alive at the same time. Our brain doesn't know what to do about it and so we tend to react in an emotional manner.  In the moment we tend to be terrified and repelled, outside the moment curious and attracted.

The mental overload and cognitive dissonance resulting from a very close straddling of two different containers is also why I think there tends to be a limit of believability to weird things and what separates the weird from other things. Ghosts are believable because they paradoxically combine the categories of life and death, things which seem to form an opposition or duality. When something tends to straddle multiple categories it tends to come across more unbelievable than believable and weird. Like the idea of a ghost, something dead yet living is believable, but the idea of a ghost who is dead which has leathery batwings seems a bit more silly even though it's all equally unreal and impossible.

Furthermore, I think the strangest things tend to be those which combine the paradoxical. A river flowing uphill defying gravity, that is odd. However, I think something that is far more strange and interesting is a river of flowing liquid fire. It flows like water and feels like water, yet glows and wavers like flame and even though it feels cold to the touch things soaked in it too long seem to turn to ash. When you combine things of apposing or opposite qualities, you don't just create something that is behaving in an odd fashion, you create something that our brains think fundamentally shouldn't exist. And yet does.

The following is a large table that helps create the basic weird wonder. There are three columns.

Feature: this is the actual physical thing that comprises the wonder, constructed or natural. They are things of a singular nature that would lend themselves to a smaller adventuring site rather than something sprawling.

Duality:  the source of the weird, the duality. It will take some imagination and abstract thought in this column are listed two opposites. The wonder should in some way or another embody these two opposites.

Guardian: the guardian of the wonder presented as a list of archetypes. As mentioned before, I am using the term guardian very loosely. They may be a single individual, group of people, monster, etc. They serve to create player interaction and a probable reason why the wonder has remained isolated and hidden.  Their motivations and intent when interacting with the party may vary.

After rolling on the above chart you should have the basics of a weird wonder. In some way the wonder should be momentous. It is a place where something happened. Something long ago.  It should have a sense of scale or of time, evoke a feeling of awe and mystery. It should have a past that the players will never be able to fully unravel as it's history is lost, but glimpses of that history, of its scale and timelessness, lay all about it.

Roll on the following chart until you get something that makes sense for the weird wonder. You may have to do this several times. Remember, it's the wonder itself that is weird, not it's history, it's history should be simply unknown.

To keep things simple and avoid creating too much lore or backstory weird wonders should seek to concisely answer the following questions. Some of them may not be applicable to all wonders. You also only really need to answer a handful, in creating a sense of the weird and unknown it's better to give out less information than more. Overall the questions help prompt thought and break down information about the wonders into tidbits that can be given the players as they decide to seek it out and investigate it. 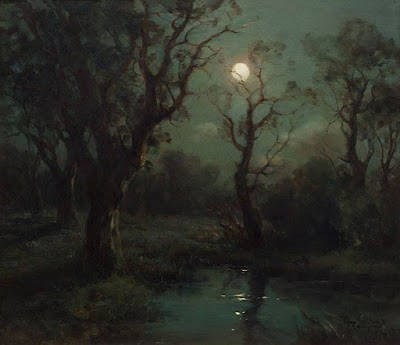 Rolling, on the above charts I got the following:

Using the setting that I have been creating as I go in this blog series, I came up with the following:

What is it physically?

Few know about it, but deep within the Black Basin lies a pool of silver water so bright and luminous it looks like a sliver of the moon. In tales told by the drifting gypsies of the swamp, it is said to have been sacred long ago when the moon was young and the swamp a forest.

Now it is a haunted place, a place where a race of strange creatures called the Forgotten dwell. Watery empty hollow men and women who walk about in strange legion forever seeking to remember who they once were. Strange tales abound about encounters with them.

Who strange qualities does it posses?

The howling of vengeful spirits can be heard all about the pool, heard in the day, in the night, under the soon and amid the stars. They howl for they know the awful bargain of the pool. From spirit to flesh, and flesh to spirit. Into the pool they dive and from it they arise, once again clothed in flesh. But with all memory of their awful grudge struck from them. As one of the Forgotten they are doomed to roam. And so the vengeful spirits swirl about the pool desperately wanting the flesh to wreak their vengeance, but unwilling to forget, until desperation mounting, they enter, hoping that as one of the Forsaken they will encounter something that reminds them of their grudge.

When was it last visited?

The eldest of the Peatsmen matriarchs visited it long ago. With her she brought the body of her disgraced son who died in a duel. When she placed his body into the waters of the Silver Pool his flesh sank away from his bones which turned to shimmering moonlight. From dead flesh to gentle spirit he arose, his burden lifted, his spirit freed to drift with his ancestors among the stars.

When was it forgotten?

Once long ago there were people who dwelt in the forests before the swamp. They worshiped the Moon Pool. Necklaces of gold with images of the bear and auroch they threw into the pool and waters around it in funeral rite as they placed their tormented dead within it's waters. Every so often their strange necklaces turn up, dredged up from the bottom. Every so often one of their crumbling moon markers can be found in the swamp.

When is the best time to visit it?

It is said the Moon Pool can only be found on lights of a full moon and that one can only be lead there by the urging of the tormented dead.