Weirdcrawl: Qualities of a Weird Wonder


This is part of an ongoing series. Click here for the index.

In summary, so far in this series I have formulated the following as the basic setup of my 'weirdcrawl':


It is having the players quest for and explore these weird wonders that I am most interested in. The previous posts have explored various things like geographical considerations or how to create a gradual sense of weirdness as players venture further and further into the wilderness. Today I will begin exploring the weird wonders themselves a bit more.

Qualities of a Weird Wonder 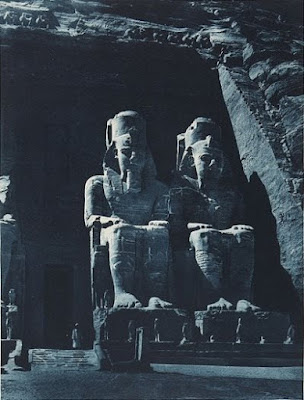 To try and answer these questions about the weird wonders I have created a few baseline qualities that a weird wonder contains:

1. Sense of Scale:
The weird wonders should contain a sense of scale. Bigger things, mountains, giant statues, hanging gardens, tend to be more awe inspiring and worthy of dangerous travel to. Additionally, by making them big it makes it harder for the players to bring them back to civilization and exploit them and helps explain why no one else has done so already. So while the physical size of the weird wonder may range and while it doesn't necessarily need to be gargantuan it should not be anything that could be easily used as an item.

2. Unknown Creation:
The weird wonder should have a timeless quality to its creation where even if it is man-made or constructed, it should have an unknown feel to it's creation. Where it gives the sense that it's existed for so long it exists almost apart from time or was created by a people or culture so different that they feel very alien. When the players gaze upon it they should have a hard time placing it in their conception of the history of the setting or human history.

3. Enigmatic purpose:
The purpose of it should at the same time be both obvious and yet hard to discern; the 'what' should be easily determined, the 'why' enigmatic, possibly even forever cryptic. For example, a giant evil
Statue of the Forgotten Leper King . It should be obvious that it was created, as most statues are, to celebrate or mark something. However, what that something is or the exact details should be enigmatic. Same with more natural things. The Graveyard of the Porcelain Elephants should be obvious when you see it. But why the Porcelain Elephants return only there to die of old age, or why they seem to exhibit such strange funerary behavior probably forever unknown.

4. Weird Quality:
This should almost go without saying but the weird wonder should possess some kind of weird quality or supernatural property beyond just being really old and mysterious. Something that wouldn't be able to exist in our world. Like life ages and decays at a greater rate around the Statue of the Forgotten Leper King yet white lily's seem to surround it that are said to be able to rejuvenate dead flesh. This weird quality or property should offer very little explanation of it's mechanism or why it exists. It just does.

5. Singular Site and Nature:
While the weird wonder itself should contain a sense of scale. It shouldn't be a vast sprawling site like an entire forgotten or lost city, or a massive cave complex. It should be of a singular site and nature. This helps explain why it is isolated and has yet to be explored and why the legends about it are focused. Additionally, from a gaming perspective, if the site for it is too big, it's easy for the players to loose sight of the forest amid all the trees. An adventuring site with only half a dozen to a dozen or so encounters tends to have more cohesive internal logic and focus around it's mysteries, than one with a hundred. The real adventure also shouldn't be just the exploration of the weird wonder, it should be the entire journey of getting there.

6. Trail of Remnants and Disruptions:
The weird wonders shouldn't be things you stumble across or just suddenly find out of the blue. Their very presence, in some manner or another, should have remnants and disruptions around them. I do not mean this in a purely thematic sense. I mean it in the sense that if they are man-made some group devoted an awful lot of resources to their construction in some form or another. Remnants of this should dot the landscape. There should be things like abandoned quarries of stone that was used for its construction. Old shrines or houses or roads on the way to it. Maybe old carvings recording it's construction and history. Likewise whatever group built it probably considered it some kind 'pinnacle' achievement of their group. It should embody some kind of group ideal or expression in things ranging from it's architecture to recordings of it's construction, to mass graves of slaves worked to death to build it.

Natural weird wonders can be thought of in the same way. If a certain species is gathering is gathering in one place, or there is a very distinct natural feature in the landscape, it's likely to attract or scare off other species. It may even disrupt weather patterns or harbour previously undiscovered natural species or things.

In this manner as the players seek out and journey towards weird wonders they should encounter this trail of remnants and disruptions as they venture into the unknown.

7. Guardians:
I am using the term guardian very loosely here, but it should have some personified people, creatures, beings, animals, characters etc. that are associated with it and serve to antagonize those that seek it out. They may do this for a variety of reasons and may not be immediately hostile to party etc. Their presence helps explains why it has remained isolated and hidden and serve to help make seeking it out not just a one sided affair. The party is not just exploring an empty site, they are going to have to interact with other characters or people.

However it is important that the wonder and guardian itself are never active. They never intrude upon the world of the heroes and essentially pose no threat to the 'settled' world. The Guardian isn't at the center of things, the wonder is. The Guardian more or less knows about the wonder and serves as a point of interaction and a probable reason why it's remained isolated and hidden.  Their motivations for doing so may vary.