Knock magazine is a 212 full colour magazine that is a collection of OSR gaming things. Articles, charts, random tables, classes you name it.

What I think really separates Knock from other such magazines is it's layout which is full of colour and very slick: 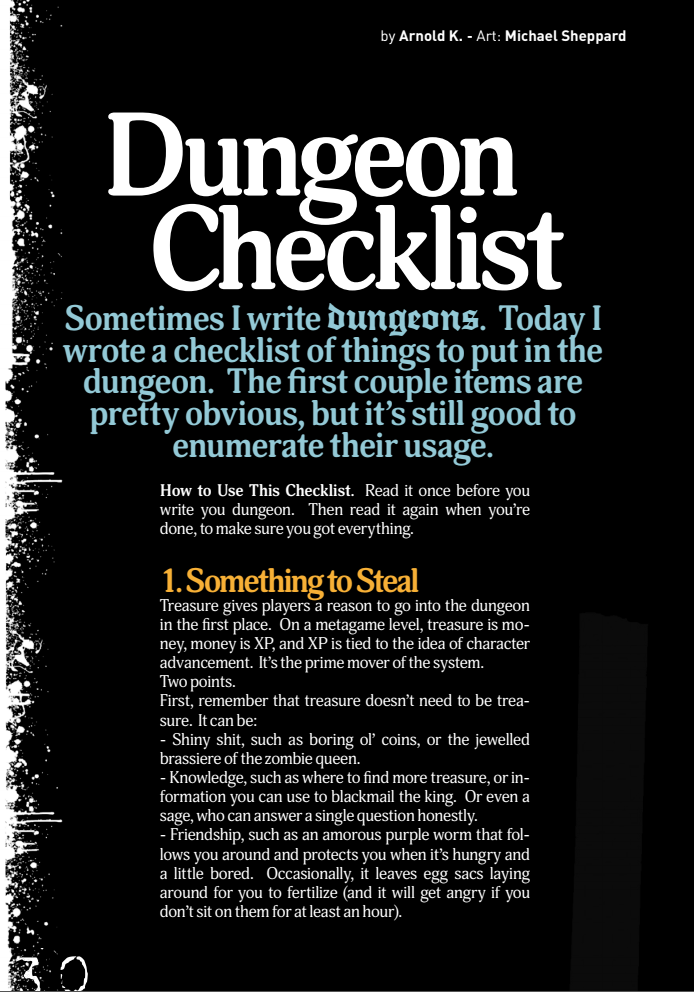 Overall its a fairly easy and enjoyable read. I finished it in a day or two. It has a variety of things and I would say I found more than the usual amount of useful information and tables I generally find in such collections.

The one other thing which I do think really separates it apart from other such magazines or efforts is that it has a large number of famous blog posts from the OSR scene. Some of which I had read, some of which I had not.

For years the best advice I could kind of give someone asking what is OSR and who was interested in the scene was to suggest a few blog posts or articles that gave good advice on what makes OSR games different from other RPGs.

The OSR is kind of getting to the point though that some of the original blogs and posts are no longer really with us, or at times hard to find. Boomarks become outdated and sometimes you don't feel like searching through someone's blog with 100's of posts just to find that one article you kind of vaguely remember as the original kernel for an idea you had or how you play the game.

Knock magazine is really doing everyone a bit of a service but helping to collect and preserve this information. The first issue was pretty good and has gotten everyone's attention and I'm interested to see what the next one is like.

I hope it continues for a while and kind of becomes the unofficial Dungeon Masters Guide of the OSR. In many ways I think it's struck on the perfect format for an OSR DMG. It's easy to read, written in a casual, fun manner and it's not for any one particular system. It contains a variety of engaging articles and useful random tables and things that really makes you consider, what do I want my game to be like? What am I excited about?

Being creative and flexible enough to play things out with your players to see what happens is probably the most important part of the OSR mindset to me. And Kock really inspires this.