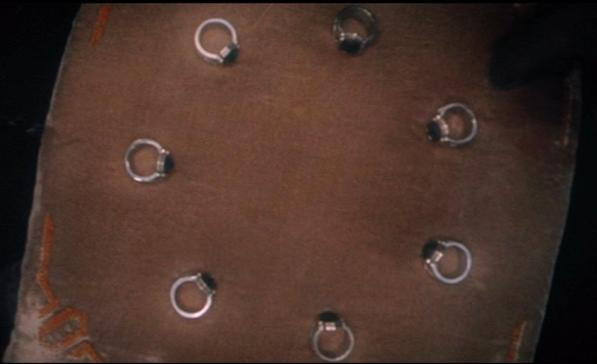 The creation of a ring of power is a 3rd level spell very much like sword magic and utilizes the same general process and the same charts as noted below. In general the following (it's the same as the one used for sword magic) is used for the spell check:

At the very least the forging of a ring of power requires a working forge and involves one day of intense ritualized work and 100 gp multipled by the spell check rolled. Thus if a 24 is rolled it's going to take 24 days and cost 2400 gold. The Judge is free to determine that more powerful rings of power require the use of specialized forges or strange and exotic materials that the cleric has to quest for.

Just like in sword magic, the clerics level determines the maximum possible effectiveness of the ring: CL5 = +1, CL6 = +2, CL7 = +3, CL8 = +4, CL10 = +5. The cleric has to make a spell check and compare the result to the sword magic related table in the core book, Table 8-4, to determine the “plus” of the ring, it's intelligence, and how it communicates (ignore all other fields in that chart). Rings of power forged by a cleric of Daenthar are always lawful or neutral, never chaotic.

Unlike sword magic where the created magic weapon contains a special purpose which it communicates to it's user through urges which may require the PC to make apposed intelligence checks to ignore, rings of power amplify flaws apparent in the PC. The PC or Judge must select one flaw or personal weakness such as greed, pride, anger, paranoia, etc. The PC must make an apposed intelligence check to resist the flaw when an opportunity presents itself or is a likely response.

In addition to its ability bonus, the ring grants the wearer one special power usable a number of times per day equal to its 'plus'. If the ring grants a spell like power that allows the caster to target someone the target is automatically whomever is wearing the ring.