I've always struggled about what to do with languages in OSR games. They always seem like a binary thing. The players find some writing in an ancient tomb detailing something about it. It's written in ancient Greek or elven or whatever. If the players know the language, great, they get that interesting little bit of information. If they don't then they don't get that information.

But what if the information is necessary to solve some kind of puzzle in the dungeon? Do you just give it to them? Tell them to leave the dungeon to go find a translator? Fudge a dice roll? And what about learning new languages? How do you know which one to choose? And who wants to have their character spend time learning a new language?  No one. Or at least in my experience no one.

Still, there is something very appealing to having that ancient tomb writing being in a a dead somewhat spooky language. Or having the random peasant only able to converse in Dutch. To making the players work a bit to uncover the information or struggle to communicate.

While this isn't bad it still left a bit to be desired for me. It felt like your character just happens to suddenly know a language. Additionally, most times, one person would just put a few points into languages and then be the official translator for the group as they'd always be the one to suddenly know the new language. Overall, it's a good solution but didn't feel super organic to me.

If one character knows one language wouldn't it make it easier to know another language like it? Like Italian and Spanish? What if there was a way to see how close languages are to each other, or how they evolve from each other... like some kind of tree...

Then it basically hit me. This is, in fact, a huge part of the field of linguistics. 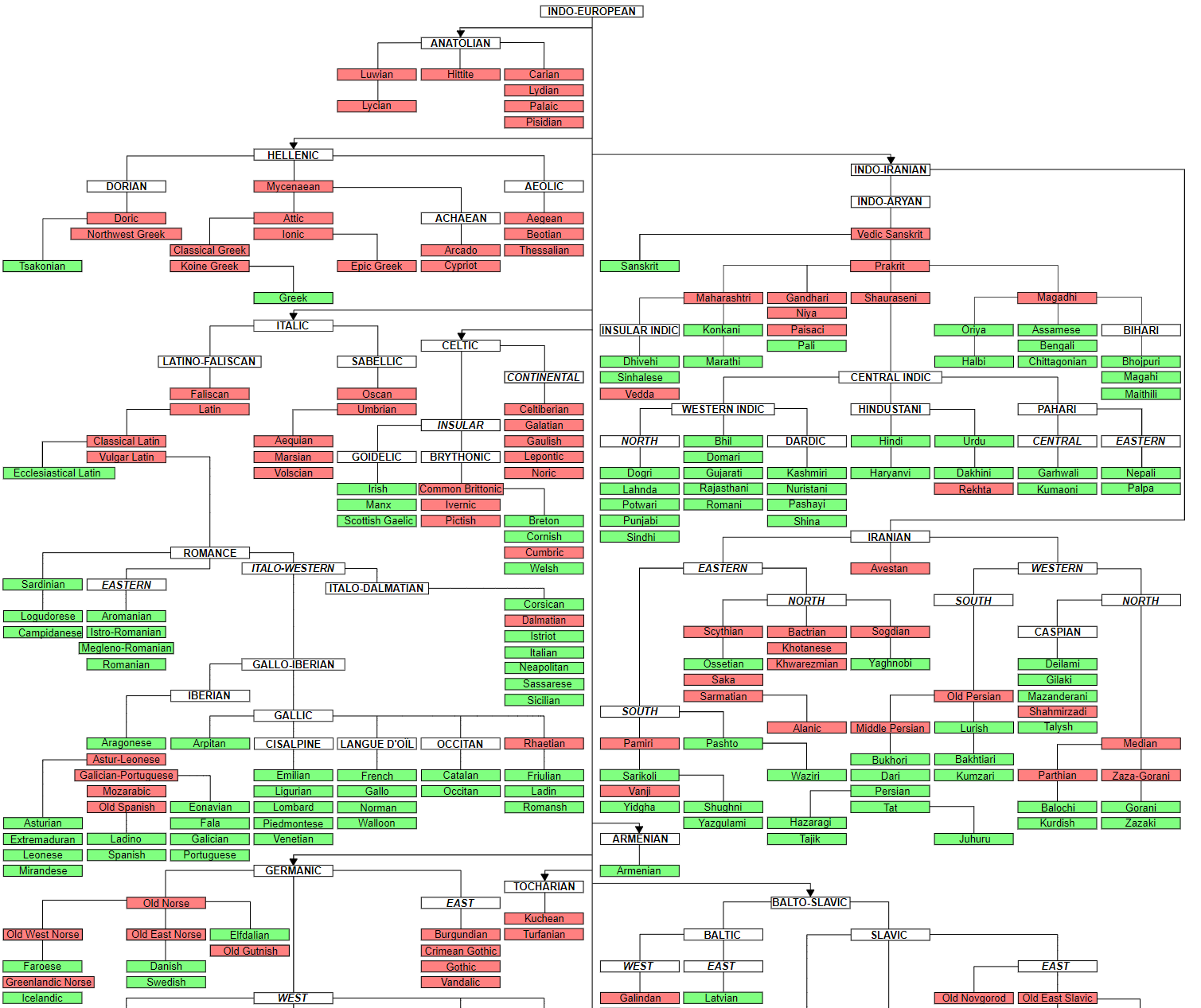 I could just use a language tree in my game to track languages, their relation, and how easy/hard it would be for a character to read a new language.

To begin I created a simplified tree. I like my games to be set in a quasi early modern era, European centric, world, so I'm using real world languages. Create one with fantasy languages for your own setting if that's more appropriate. I'm going to use the following: 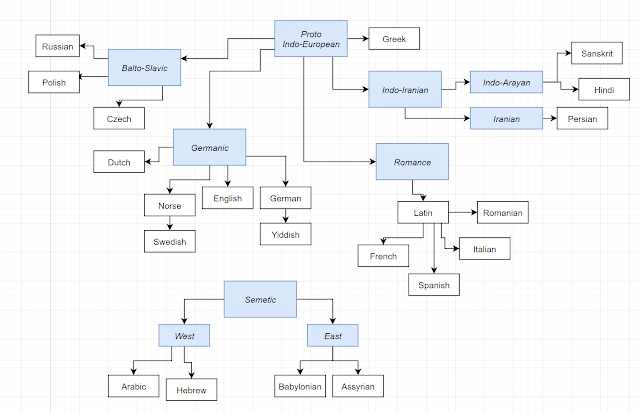 In it I have 22 languages (the white blocks). These languages would be all the languages I'd use in my game. If a module or something used a different language I'd just substitute. The players know up front how many there are and what they are.

All players know whatever common language they are using (generally whatever the language is of the country they're located in) plus one additional language for their ethnicity. Spellcasters I also usually give an extra language to. If I have four players that's a usually a good 5-6 languages among them. Not bad. I'd then circle them on this chart.

If a player wants to read a language they don't know already then I'd navigate to it on the flow chart counting the nodes. So to go from Dutch to Czech is four steps. I would then apply a penalty of 4 of some kind to their roll to see if they could read it. So maybe something like they have to roll under their intelligence but do so by adding +4 to the die roll. The exact mechanic doesn't matter. Just have it scale per nodes traversed.

I would make them do this roll every time they wanted to read a scrap of writing in a language they didn't know. Maybe sometimes they're able to piece together what it's saying in Czech based on similarities to their own language and bits of pieces they may know of it. Other times, what it's saying is to difficult or complex for them to discern. But if they know Russian, it's likely to be easier.

Regardless, by having it all mapped out it makes it easier to quickly determine how hard it is going to be to read a certain language. It also kind of makes sense intuitively where languages that tend to be in a close region, and which are similar to one you speak, you stand a greater chance of being able to read. And if a language is from an entirely different group with no line to it, you're going to need to find someone who knows a language from that group.

Having the languages presented this way also allows a player to be strategic when learning a new language. They could go for an entirely new language group like Semetic and learn Arabic which would allow them to potentially read four new languages that they could not at all before.

In this manner I think it strikes a balance between allowing players to read different languages they come across as well as encouraging them to have their characters learn new languages.