I like level-less spells. I find using them and allowing them to scale in power by the discretion of the Referee and player to be a really elegant way of having magic in OSR games. For my ruleset I use the 1d100 level-less spell list from Knave by Ben Milton.

I like to use the Knave set of spells because they're also very utility focused. They allow the caster to do interesting things, but mostly to overcome situations and manipulate environments rather than do damage in combat. I like for fighter type classes in my games to be the class that is really good at combat, the specalist/thief type to be okay in combat but better at skills, and the magic-user to be really weak but good at random problem solving.

However, I do find that using a level-less spell list like this of simple spells tends to make magic seem a little bland or pedestrian. At first I was going to use some kind of spell name generator to theme a characters spells but couldn't find a good one.

However, I came across the idea of using grimoires in the Hark A Wizard supplement by Zzarchov Kowolski. In it he details that it made his game more interesting because grimoires containing spells tend to be evocative and give something for the Wizard players to track down to learn new spells. If you'v ever played Call of Cthulhu, which he cites as an inspiration, you know what this is like. He listed a bunch of samples: 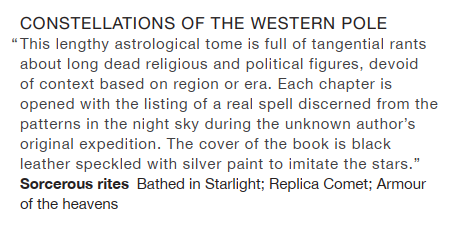 I liked this idea, liked it a lot where for each grimoire I would randomly select a Knave spell. The grimoire itself would theme the spell. Like for example, if I randomly selected Adhere to be found in Constellations of the Western Pole (celestial themed), I'd probably making a ruling that whenever you cast the spell the object you are casting it upon is covered in a glowing luminescent fluid that swirls and is like some unknown state of matter and causes things to get stuck to whatever touches the object by some unknown force of attraction.
If you found a different grimoire with the same adhere spell, it would be described in a totally different way and have a different manifestation. I found this also fit very well with how I liked to portray magic in my game. Where magic is something very dangerous and esoteric that mad hermits, outsiders, insane people, and power hungry occultists, pursue. Magic-user player characters aren't natural born wizards or have learned it in a school. They have stumbled across an esoteric, barely comprehensible grimoire and are largely self-taught.
I further combined this with the additional idea of blasphemies as presented in Broodmother Skyfortress Jeff Rients,

His grimoires included the concept of a blasphemy. Basically some truth that would be horrifying to the people of the setting. His game was set in early modern Europe so they were generally about religious things.
While I liked this idea, I found the religious based blasphemy's didn't really pack the punch I wanted. I wanted the players not just their characters to feel shocked or trepidations about them.
Out of this, I came up with the idea of having each grimoire including a occult truth. Basically some fundamental hidden truth about the world or society. That no matter how outlandish would immediately become true about the setting of the game upon that character reading the grimoire and learning it's spell. If the occult truth was that society was secretly run by shapeshifting lizardmen, then boom! That was now true for the setting, and the players might want to become a little more suspicious of their rich patron the Duke. If the occult truth was that exposure to moonlight caused gradual madness, then boom! The players might want to make sure they're sleeping in tents and avoid those wandering about with a lunatic grin. And the players might be a little more hesitant about reading whatever grimoire that they come across. Where they have to ask themselves are they willing to risk messing up the setting for an extra spell?
So overall I ended up combing all these ideas into something like the following example grimoire:
-----------------------

Titles: Proverbs of the Unknown Philosopher, The Eternal Mountain, The Quivering Reed

Description: This simple chapbook is composed of reed paper pages in-between sandalwood covers bound together by small leather hoops. Written delicately within using a stylus and black squid ink are the 36 proverbs of the Unknown Philosopher. These simple kaons have driven many a hermit to madness and are said unlock the innermost door.

Occult Truth: All beings (including player characters) reincarnate up or down the great chain of being upon death. It is possible to trigger memories of other lives.

Champion: a champion from another dimension is summoned. It is able to answer most questions, and may aid you if it finds you worthy.

Manifestation: the champion appears as a warrior monk with black marble skin and ruby red eyes. They have taken a vow of silence and cannot speak but can convey things through gestures. They respect those who are exhibit calm and mindfulness in all matters.